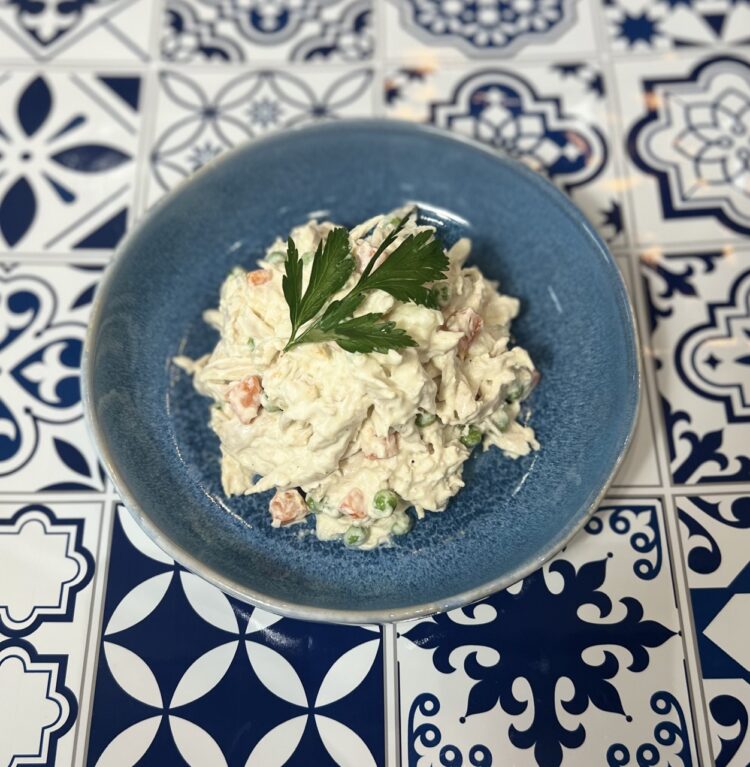 Chicken salad is such a great thing to pull out for gatherings. It’s versatile to serve with a lot of different things and who doesn’t love pulled chicken tossed around in a very creamy dressing.

This Ensalada Gallina is Venezuela’s version of chicken salad. It is similar to Spain’s ensalada rusa because of the starchy additions like potato and carrot. Yet still has its own very distinct flavor.

What sets Ensalada Gallina apart from other chicken salads and gives it that delicious bite? The grated onion. We can’t stress this enough, don’t skimp on them. They lend a distinct and special flavor to the salad.

Let’s Talk About The Chicken in this Ensalada Gallina

If you have time, you can boil or roast chicken breast for the recipe. However we suggest going with the store bought rotisserie chicken, it’s just as good and saves you the time and cleanup.

Another thing that sets this Ensalada apart from other chicken salads is instead of chopping, we are finely shredding the chicken.

You can set Ensalada Gallina out with crackers, or homemade crostini. BUT it is a natural pair with its Venezuelan counterpart- the Arepa.

Ensalada de gallina happens to be the star in two of my favorite arepas- La Reina Pepiada and La Sifrina.

Sidenote: To Make a “Reina Pepiada” (the AAAA Queen) add this chicken salad to an arepa,

Additional Sidenote: To Make a “La Sifrina” (the snob) add the chicken salad, avocado and loads of gouda cheese.