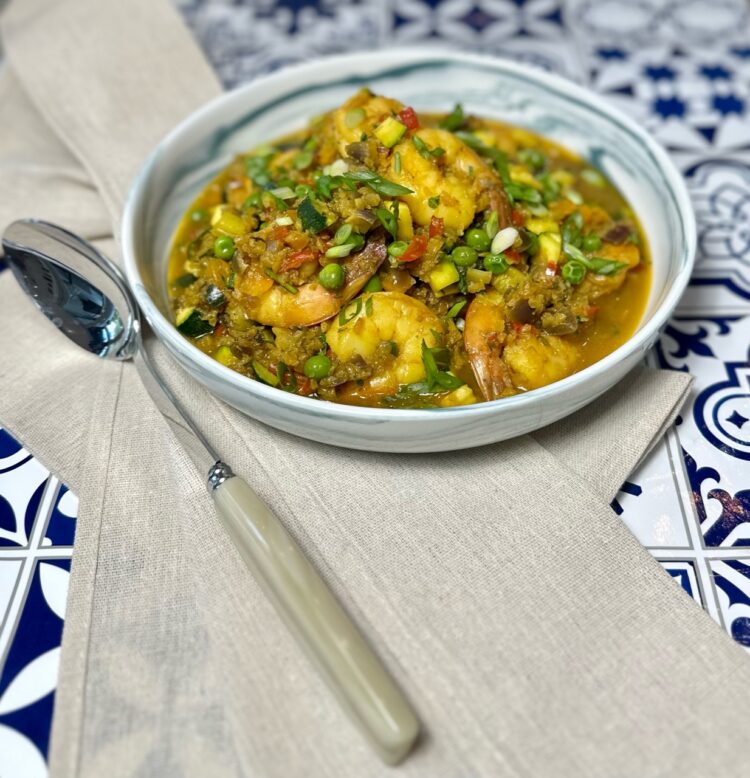 Cauliflower rice with shrimp is a nod to the Cuban staple, Arroz con Camarones. While we are not opposed to making this just as it was intended, with rice, we felt that making a Cauliflower Rice substitution was a great way to keep all the traditional flavoring you love but add an additional layer of healthy veggies.

The flavor of Arroz con Camarones is reminiscent of Paella but it has less ingredients and comes together a lot quicker.  The cauliflower and shrimp get a beautiful golden hue from bijol and other seasonings, which also add a lot of flavor to the dish.

“Arroz con Camarones” was one of my grandmother Alita Lily’s company dishes. She made homemade fish broth from fresh fish heads and used it to make this dish. Her arroz con camarones had equal parts shrimp to rice. She was unapologetically extra that way! She would make the recipe just up to the part where you add the shrimp. Once she was ready to serve, she would remove trays and trays of the shrimp from the fridge. She would have everyone sit down to her perfectly adorned table and then throw the shrimp in. By the time everyone sat down, the dish was ready to eat. She served it with maduros and Cesar salad

Speaking of flavor, Tips for Making the Best Cauliflower with Shrimp…

We like to keep the shrimp tails on for these types of recipes because they intensify the essence of seafood in the dish and makes the plate look a little prettier, but it’s up to you.

You can substitute the shrimp for other seafood such as calamari, mussels, clams or even a combination of several types, which would be similar to “arroz con mariscos,” or rice with seafood. .

You can do the same with thing Alita Lily used to do, follow each step of the recipe, add the wine and the broth but don’t add the shrimp. You can make most of this ahead for a couple of hours and let it sit out. Then when you are ready to serve, bring everything in the pan to a boil and add the shrimp. They will take about 5-7 minutes to cook through.

Keep it healthy and serve with one of our salads or indulge a little and serve with Tostones or Maduros. You just had a bowl full of veggies. You’ve earned it!