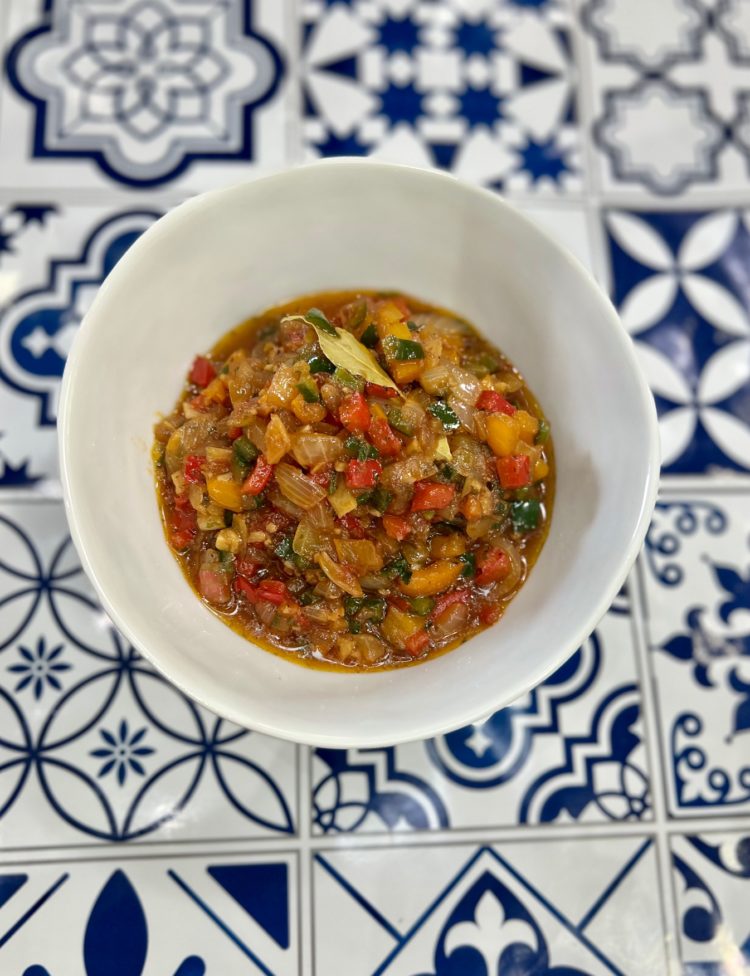 A good Cuban Sofrito Recipe is really the secret to elevating almost any Cuban recipe you are going to make. So while don’t want to put any pressure on your cuban sofrito, it is kind of a big deal.

The good news is that making a good Cuban Sofrito is not difficult, and with just a few tweaks you can probably take your sofrito game to the next level.

The first thing an authentic Cuban Sofrito calls for is onions. You want to be sure to use a large white onion, and dice your onion so that all the pieces are uniform.

Next a Cuban Sofrito Recipe calls for 3 peppers. We recommend doing a red bell pepper, a poblano pepper, and an orange pepper. The most important thing is to use three peppers that you like to use. A Cubanelle pepper could work well here or you can double up on red bell peppers or go with a green pepper. You get the idea. Then you you round out your Cuban Sofrito Recipe with minced garlic, sazon, bay leaves, cumin and salt and pepper.

The big trick to remember

You want to add these seasonings to the pan as you cook each ingredient. What does this mean? It means when you add the onions, as they cook you want to season them with some of the salt and pepper, and some of the sazon.

Then once you add the peppers you add the rest of the seasoning as well the bay leaves. Why do we do this? We do this because cooking the seasoning with the vegetables help the seasonings open up. It also helps you build more flavor. And flavor is the name of the game with sofrito.

What to do With Your Sofrito

Like we said at the beginning, this simple sofrito recipe is the base for countless of recipes. However what you do next just depends on what recipe you are going to make. This is because not all recipes will need tomato sauce.

So if you are going to be making something like Carne Con Papa, Ropa Vieja, Picadillo, Arroz Con Pollo, Fricase de Pollo– after cooking the vegetables you can add a tablespoon or two of tomato sauce with a 1/4 cup of a good vino seco.

But if you are going to be making something like Cuban Black Beans or a Potaje like this Potaje de Garbanzo you would eliminate the tomato sauce, and just use some of the vino seco.