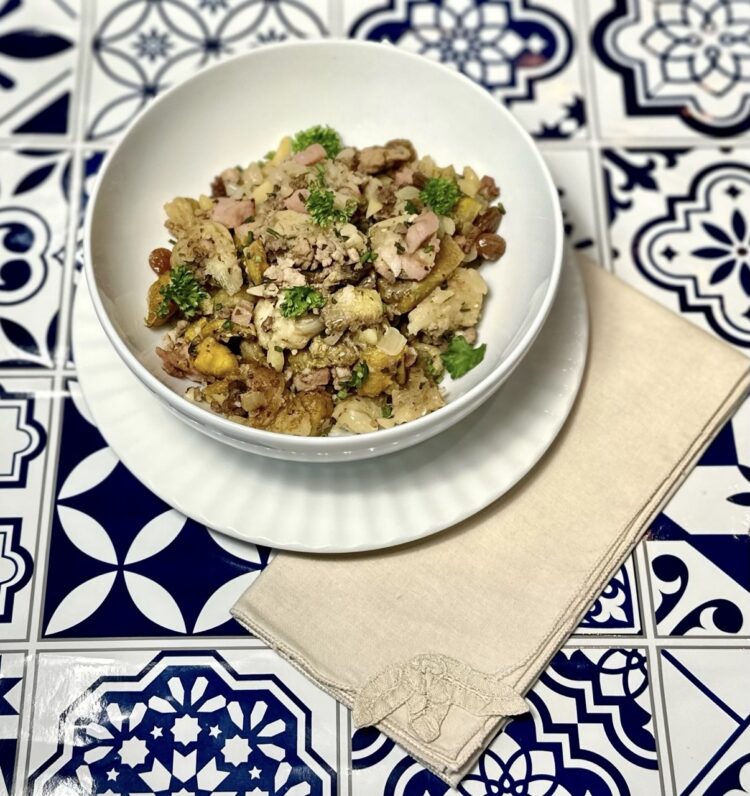 Cuban Stuffing is a big punch of flavor on a classic American dish. Stuffing, as we all know, is a traditional Thanksgiving dish. It is usually made with cornbread, or a white bread, and mixed with onions and celery and warm spices. It isn’t surprising that Cubans, being in exile, found a way to give it their own spin.

There were many households who stuck to what they knew at Thanksgiving. Things such as Congri and Yuca. There were, however, other households who were trying to adapt to a new life in a new country. Cuban Stuffing was born from the Cuban exile community’s need to fit in and celebrate the Thanksgiving holiday with a combination of ingredients they were familiar with and ingredients they were recently exposed to by living in the USA.

Cuban Stuffing starts with a simple picadillo tossed with plantains and Cuban bread, but then studded with some signature holiday ingredients such as almonds and warm spices. It is a delicious clash of two cultures on one plate.

This recipe changed from year to year when my mom and grandmother would make this for thanksgiving. Sometimes they would add dates instead of raisins or corn bread instead of Cuban bread or walnuts instead of almonds, but the culmination of sweet, savory, familiar Cuban ingredients and traditional American components were always there married together.

If you want to make this in advance you can make the stuffing a day before, place in a baking dish and bake for 20 minutes in a preheated 400 degree oven. It will be warm on the inside and form a crispy crust on the outside.

This Cuban Stuffing is the perfect compliment to our Mojo Turkey and Creamy Greens.